The second largest producer of gold in the UK’s history

The Gwynfynydd Gold Mine is the second largest producer of gold in the UK’s history, after the Clogau-St David’s Gold Mine.

The Gwynfynydd Gold Mine has historically produced around 45,000 ounces of gold at a mining grade of 15 grams/tonne. Commercial operations at Gwynfynydd ceased in 1999 when the gold price was only around US$300 per ounce.

Gwynfynydd shares many of the same geological and mineralogical characteristics of Clogau, meaning that Alba can roll out the same modern exploration and development methods as have been successfully deployed at Clogau-St David’s. 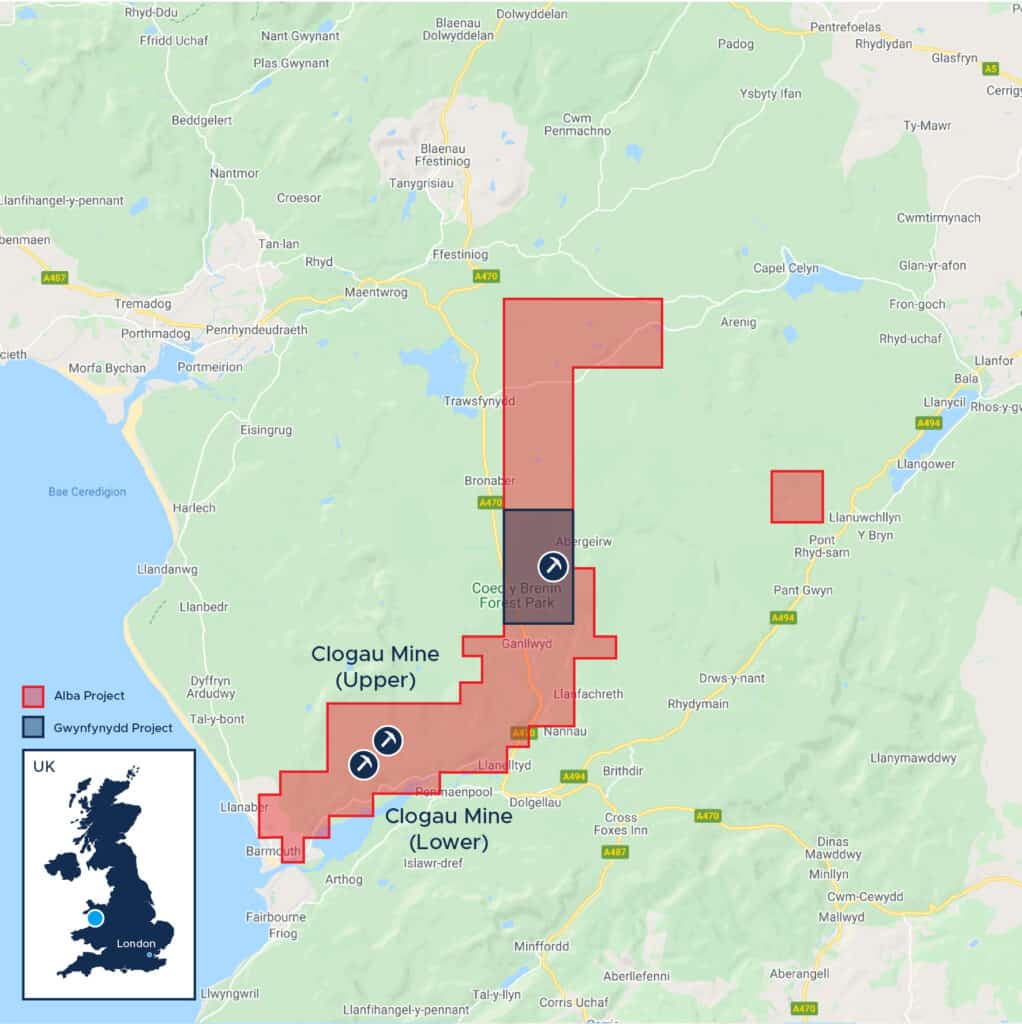 The Gwynfynydd Gold Mine is located close to the town of Ganllwyd in the county of Gwynedd, north Wales. Gwynfynydd lies within the Dolgellau Gold Belt, a known geological formation which forms an arc approximately 26 km long by 6 km wide around the south-eastern and eastern margins of the Harlech Dome.

The quartz vein (or lode) at Gwynfynydd was discovered in 1860 and started commercial development in 1887. The Gwynfynydd Mine has produced around 45,000 ounces (around 1.3 tonnes) of gold since inception with a historical mining grade of 15 grams of gold per tonne. Gwynfynydd became one of the most important mines in the Dolgellau Gold Belt and, together with the Clogau-St David’s Gold Mine, contributed some 95% of the total gold output from the area.

At Gwynfynydd, production last took place between 1991 and 1999, when 10,000 tonnes of ore was extracted annually from a total estimated resource base of 180,000 tonnes. All the 20th Century production came from the Chidlaw Link Zone, which varies in thickness from one to eight metres.

Alba Mineral Resources Plc (AIM: ALBA) is a mineral exploration and development company with a strong portfolio of mining assets in the UK and Greenland.

🚨🚨 #GROC reports an almost THREE TIMES increase in its mineral resource estimate at the Amitsoq Graphite Project in southern #Greenland, one of the highest-grade #graphite deposits in the world.

A significant target is located below and to the east of the Chidlaw Link Zone. This deep zone, more than 250 metres below surface, was tested by only a single diamond drill hole from surface (drilled in 1992) and is constrained by faults which are known from surface and underground mapping.

The Collett Lode was separately estimated at the time to contain 20,000 tonnes at a grade of between 5 g/t Au to 8 g/t Au between the No 2 and 6 Levels, west of the Link Zone. Tonnage was based on projected volumes of reef between the two levels and grade based on historical gold yields.

In 1985, an underground drilling programme was undertaken at Gwynfynydd. The exploration programme included twelve drill holes totalling 810 metres, which were drilled from the Mine’s Number 6 Level to investigate the Chidlaw Link Zone at depth.  On average the quartz bodies intercepted were 3.5 metres thick and were considered to be related to lode zones seen during past mining operations on the Chidlaw Link Zone.  The objective of the drilling was to identify the lode structure, and as such it was successful.

As at Clogau-St David’s, gold grades in drill intersections are not expected to be representative of the actual in-situ grade due to the extreme nuggety nature of the mineralisation.  It is for this reason that Alba has been undertaking bulk sampling in combination with drilling at Clogau-St David’s and a similar approach will be warranted at Gwynfynydd.

Note: The figures quoted for tonnages, grades, production and drilling results at Gwynfynydd have been taken from historical reports and have not been independently verified by Alba.  Any reference to tonnages or grades are conceptual in nature as there has been insufficient exploration to define a Mineral Resource in accordance with the JORC Code 2012 or other similar internationally recognised mineral resource codes.  Further, it is uncertain if further exploration will result in the determination of a Mineral Resource.