Alba owns an effective interest of 11.765% in the two licences, PEDL137 and PEDL 246, which comprise the Horse Hill Oil Project, located in the Weald Basin in southern England.

The operator of the licences, Horse Hill Developments Limited (HHDL), drilled the Horse Hill-1 (HH-1) oil discovery well in 2014. The well discovered oil in the Portland Sandstone, as well as in deeper formations including the Kimmeridge Clay. The well penetrated and flow tested a significant new oil play in the Kimmeridge Limestone section.

A further well, Horse Hill-2/2z (HH-2/2z) was drilled in 2019 as a horizontal well into the Kimmeridge section. The Horse Hill Oil Field benefits from planning and regulatory consents for long-term production from the existing HH-1 and HH-2z wells, with plans for further production wells to be drilled in future in order to ramp up production volumes. The field has now been in almost continuous production since July 2018, initially in a testing phase but now in full commercial production. 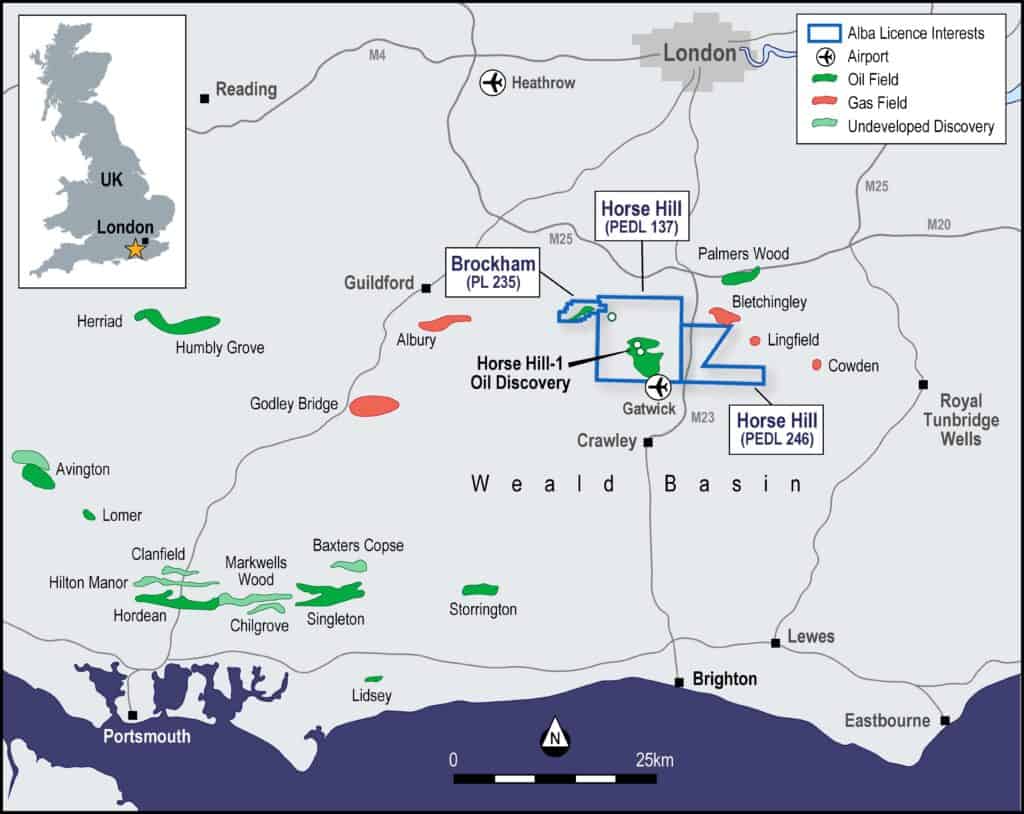 The HH-1 well was completed in November 2014, reaching a total depth of 8,770 feet or 2,673 metres, and encountering several hydrocarbon-bearing horizons. Horse Hill oil has been shown to be equivalent to high-quality Brent Crude (40 degrees API in the Kimmeridge, 35-37 degrees API in the Portland).

In May 2015 Xodus Group gave a Best Estimate (P50) for gross oil initially in place (OIIP) of 21 million barrels for the Upper Portland Sandstone conventional reservoir contained within PEDL137. This was subsequently increased in February 2017, with a Portland Sandstone Estimated P50 Stock Tank Oil in Place (STOIP) of 32 million barrels. (NB: Estimated OIP/STOIP hydrocarbon volumes should not be construed as either recoverable resources or reserves or in any way to reflect the potential producibility of hydrocarbons from the formations evaluated.)

In 2016 HHDL carried out short-term flow tests of both the Upper Portland conventional oil pool and the Upper and Lower Kimmeridge limestones in order to assess the recoverable volume of oil. The oil flow from the Lower Kimmeridge Limestone was the first ever flow from this rock unit from an onshore well in the United Kingdom.

In 2018 HHDL commenced extended well testing (EWT) operations, designed to confirm the commerciality of the Horse Hill oil discovery and to test the previously untested Kimmeridge limestones. As at October 2020, aggregate Kimmeridge and Portland production from HH-1 has exceeded [70,000] barrels.

In late 2019, HHDL completed the drilling of the HH-2/2z horizontal well, with the HH-2 vertical section drilled to ~3,000 feet, followed by a ~2,500 feet horizontal section, HH-2z, within the Portland Sandstone. While the drilling of the well was successfully completed, due to the technical challenges since encountered, HH-2/2z is not currently in test production and is expected to be converted ultimately into a vertical Portland producer.

Planning approval was granted in September 2019 for 25 years of production of up to 3,500 bopd from six wells at Horse Hill, including the existing HH-1 and HH-2/2z wells.